CERTIFICATE OF ENTITLEMENT (COE) QUOTA FOR AUGUST 2011 TO JANUARY 2012

The Certificates of Entitlement (COEs) quota for the period August 2011 to
January 2012 will be 22,324. Details of the quota for each vehicle category are at Annex A. Bidding under this quota will start with the August 2011 First Open Bidding Exercise.

The COE quota consists of the following components:

The next COE quota announcement, for the COE bidding period from February 2012 to July 2012 will be made in January 2012. The 1.5% vehicle growth rate, which is valid for 3 years from 2009-2011, is currently under review. LTA will announce the growth rate from 2012 once the review has been completed. 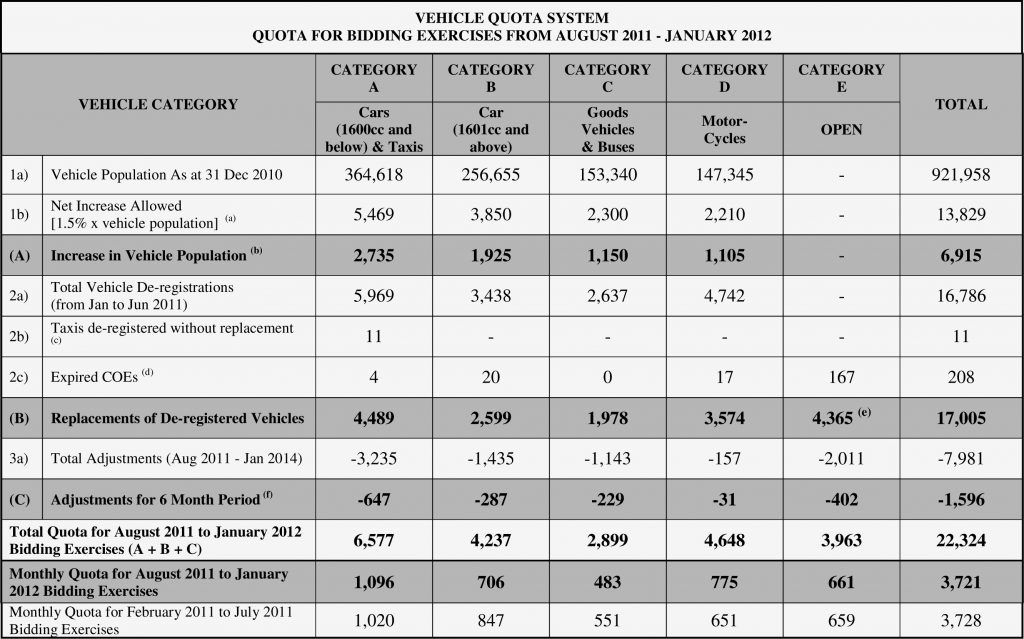 Note:
(a) The vehicle population growth rate has been set at 1.5% per annum for 3 years from 2009 to 2011.
(b) Net increase is spread over 12 bidding months from February 2011 to January 2012
(c) Taxi operators pay the prevailing quota premium (PQP) to replace their taxis within 6 months of de-registration of their taxis. If the taxi is not replaced bypaying PQP, the de-registered taxis would be recycled as replacement COEs.
(d) Refers to COEs that have been successfully secured by bidders but were not utilised during their validity period (between Jan – Jun 2011)
(e) Category E receives 25% of the de-registrations in each category.
(f) Refers to adjustments for over-projections in Quota Years 2008 and 2009, as well as expired COEs from 2009. These adjustments will be spread over 46 bidding months from April 2010 to January 2014. An adjustment of -9,577 was factored in the quota from April 2010 to July 2011. The remaining -7,981 adjustments will be spread over the next 30 months (Aug 2011 – Jan 2014).

Our related entity & financing arm,
Speed Credit, offers the cheapest car loan rates in Singapore. Partnered with 13 of the most reputable banks and financial institutions, you are sure to get the best financing option for your dream car.

Looking for a new car that would fit your lifestyle? We have a comprehensive range of new cars that might be suitable to your needs!

Looking for a quality used car in Singapore? Browse through our latest used car listings, we might have the right car for you!