According to LTA, all new cars, newly imported used cars and taxis registered from 1 January 2013 with low carbon emissions of less than or equal to 160g CO2/km will qualify for the rebates. The rebate which is between $5,000 and $20,000 will be in a form of an offset against the vehicle’s Additional Registration Fee (ARF) payable.

Taxis generally clock higher mileage and thus typically emit more CO2 per year than a car. So in order for taxi companies to adopt lower emission models for their fleet, their rebate will set at 50% higher which is between $7,500 and $30,000 compared to cars.

As for commercial vehicles, buses and motorcycles, the current Green Vehicle Rebate (GVR) will be extended till end-2014 while LTA explores how to better encourage the shift to low carbon emission models in these vehicle categories.

For non-Euro V-compliant diesel models that fall within the rebate emission bands will not enjoy the ARF rebates under CEVS due to the reason that they significantly emit more fine particulate matter. This exemption applies to both diesel cars and diesel taxis.

Transport Minister Lui Tuck Yew said that this “fee-bate” scheme draws reference from similar schemes that were successfully implemented in other countries. He added that by widening the price difference of the low emission and the high emission ones will help to hasten the switch towards low emission cars.

On the other hand, from 1 July 2013, cars with high carbon emissions (which is equal to or more than 211g CO2/km) will incur registration surcharges between $5,000 and $20,000 which is 50% higher than cars. For diesel models, whether Euro V-compliant or not, that fall within the surcharge bands will incur the appropriate registration surcharge. This applies to both diesel cars and diesel taxis.

Below are the CEVS Bandings and their corresponding rebates: 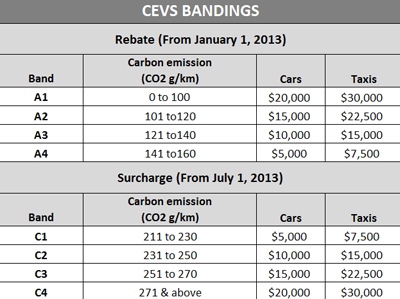 To help car buyers make informed decisions regarding carbon emissions, the CO2/km performance data for each car model will be provided on mandatory information labels at car showrooms.

It was also said that LTA will also set up a new FELS online database and online fuel cost calculator for prospective car buyers to compare carbon emission and fuel efficiency data across vehicle models. These changes will be made progressively after LTA takes over the administration of the Fuel Economy Labelling Scheme (FELS) from NEA around mid 2012.

Below is the New Fuel Economy Label: 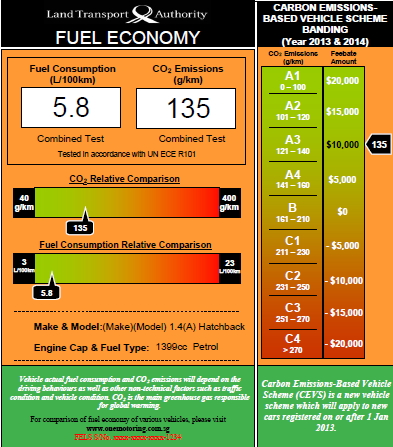 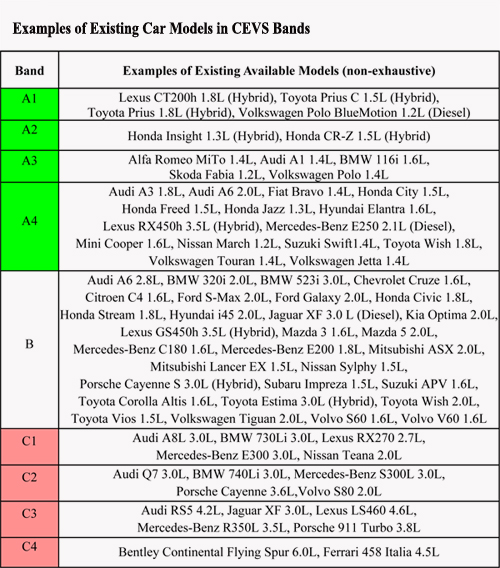 Note: Indicative listing based on combined CO2 emissions of registered motor vehicles, information available at http://els.nea.gov.sg/mfels/vehicle.asp. Actual classification of models under CEVS will be based on Fuel Economy Labelling Scheme (FELS) emissions information administered by LTA.

Disclaimer: This blog post is for reference purposes only. No copyright infringement is intended.

Tagged CEVS RebateSingapore Car News
Sign Up for Our Newsletters