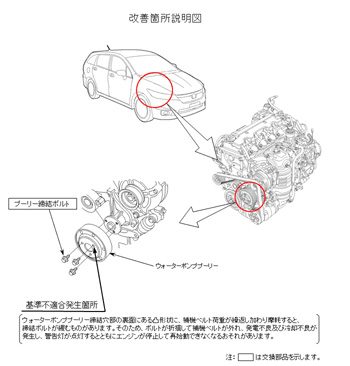 Defect sites (part name): Motor (water pump)
Deemed non-conforming structures in the reference state,Equipment or the performance of state and their causes : The convex shape of the hole on the back fastening water pump pulleys, weights and belts worn repeatedly added include loosening bolts. As a result, the belts have broken off the bolt, causing power failures and poor cooling, it may not be able to stop and restart the engine warning light is illuminated with.[symple_divider style=”solid” margin_top=”5px” margin_bottom=”10px”]
The contents of the remedies : Coated with safe products to replace the anti-loose screw bolt pulley bolts and tighten to the specified torque.[symple_divider style=”solid” margin_top=”5px” margin_bottom=”10px”]
Measures to make known to the operators who use vehicles and automobile disassembled: User notified by direct mail.
Models Affected: Honda Stream, Honda Civic & Honda Crossroads.
Total Number of Vehicles Affected: 50,122

Tagged Honda RecallSingapore Car Recalls
Sign Up for Our Newsletters